“They made the entire experience wonderful and turned my nightmare into a dream. It’s difficult when you get a bad tattoo and you think it’s impossible to fix, but if you bring it to Ainslie they will work their magic and make you wonder why you didn’t go there in the beginning.”

A few years ago, I wanted to get a tattoo of a cross put on my neck. The placement and meaning of the tattoo was very important to me. I let the artist know that I wanted a cross that looked like real wood, old and rugged. I wanted it to look like the cross that Jesus would have died on. I told the artist how much importance this held to me, and he said it would be no trouble. After it was finished, I asked him why it looked weird. He told me it was because the ink needed to set and it would look better after it healed. Being young, I took him at his word and moved on. After it was healed, I was still unhappy with it but I never made the time to go back. A week or two after I got the tattoo, I found out that the artist had been fired because too many people were complaining about his work.

For the next few years, I was ashamed of my cross. I kept it hidden beneath my hair and never showed it off. The tattoo that held so much meaning was so terrible and it made me feel awful. Early this summer, I walked into Vintage Karma with my brother and dad. They were having a consultation about their tattoos. They had already had several tattoos done at Vintage Karma and loved it so much they asked me to check it out. Knowing how I felt about my cross, my brother told me to show it to Ainslie because he had experience fixing and covering up bad tattoos. Ainslie told me that he could figure something out for me and fix it right up. I was so excited and nervous at the same time.

Over the next few weeks, we had a consultation and spoke over email about coverup design ideas. I booked my appointment and when I was shown what it would become, I was ecstatic! It only took two hours but when he finished I was breathless. My new cross is gorgeous! I always want to wear my hair up now or show it off any way I can because it is a work of art. It is so hard to believe that there used to be an ugly design beneath it! I would absolutely recommend Ainslie and Vintage Karma! They made the entire experience wonderful and turned my nightmare into a dream. It’s difficult when you get a bad tattoo and you think it’s impossible to fix, but if you bring it to Ainslie they will work their magic and make you wonder why you didn’t go there in the beginning. I will only ever get my future tattoos done there because they are that good! 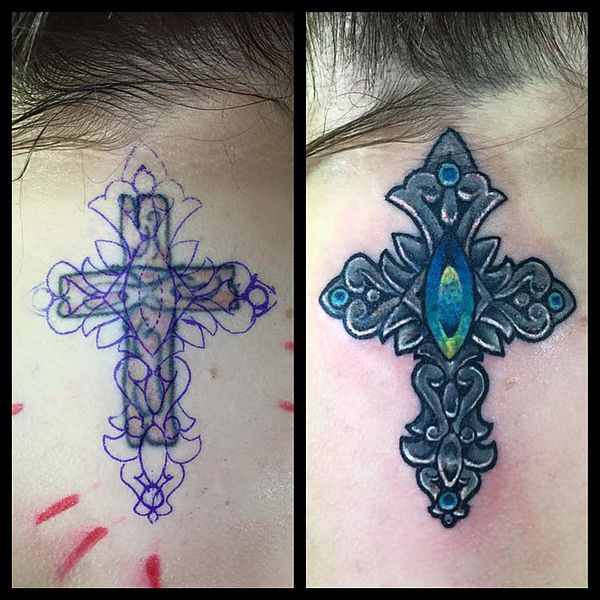 Ainslie is a Tattoo Artist and owner of Vintage Karma in Tuscola, IL. He is an Odd Fellow and founding member and Past Grand of Tuscola #316 which is right above the tattoo studio. Ainslie is also a member of Owl Creek Rebekah #91, Champaign Encampment #68, and Zonar Canton #18, all of Fisher, IL. He is also on the Grand Lodge of IL IOOF Web Committee and the Sovereign Grand Lodge Communications Committee and built/maintains their websites and Facebook Pages and is a founder of the Heart in Hand blog. When he is not tattooing or Odd Fellowing he built/maintains the official website and Facebook page for guitarist G.E. Smith and helps keep the fans connected. View all posts by Ainslie